Welcome to the mother ship: Our Saatchi newbies
We’re hiring! 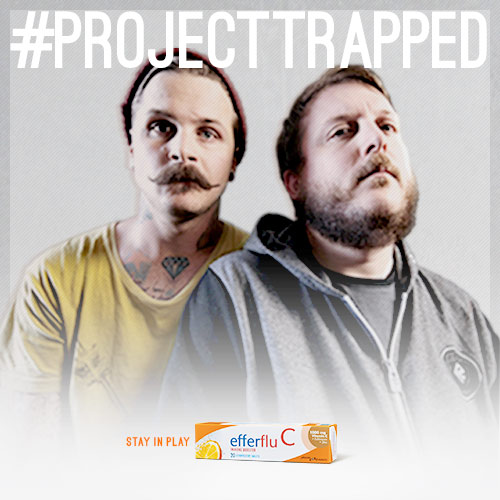 Cape Town, 29th September 2014 – To demonstrate what it feels like to get flu and miss out, Saatchi and Saatchi South Africa conducted a social experiment by locking a comedic duo in a hotel room for five days. The interactive campaign for PharmaDynamics Efferflu C Immune Booster was dubbed ‘Project Trapped’ and was awarded three Silver Loerie Awards at this year’s annual advertising awards.

The campaign featured Derick Watts & The Sunday Blues (Nic & Gareth) mistakenly embarking on the holiday of a lifetime only to discover that they were going to be locked in a hotel room for 5 days as part of a social experiment. The campaign was created to dramatise how Efferflu C Immune Booster helps keep you healthy, so you can stay in play, without missing a single moment of your exciting life.

“The success of the campaign can be attributed to the simple ingredients which made it engaging; a great prize (A holiday worth R60,000), a simple entry mechanic (Tweet suggestion) and reasons for the public to stay engaged through entertaining content,” says Creative Director at Saatchi & Saatchi, Yvonne Hall. “The integration between ATL, search, social media, crowd-sourced suggestions for the five days and a clear link to the product was a win for the brand.

“Each day we shared online videos that showed the duo’s, at times bordering on completely insane, experience of being trapped in the hotel room. We also posted videos that were guided by tweeted suggestions from the public on what they should do to entertain themselves, which allowed us to create great daily content for the duration of the campaign.”

She says that winning three silver awards at this years Loeries in traditionally difficult categories is testament to the success of how well a digital integrated campaign can work for a product category usually reserved for mundane marketing tactics. “Usually pharmaceutical products don’t experience the fun and excitement that this campaign offered,” says Hall.

She explains that the campaign reached over 6.7 million people, received over a quarter of a million YouTube views and an 88% increase in Twitter following for @efferfluC, which resulted in a 93% positive brand sentiment.