Saatchi & Saatchi Synergize
To our Tata

Don’t you just love the internet? More volatile than Mother Nature, more anonymous than a knife in the back, the web is lawless and untamed – the Wild West of the twenty-first century. People take passing pot-shots at one another without fear of reprisal. Inevitably those that are the most insensitive, callous and inflammatory triumph over the prudent, the sane, the sensible.

Now the British government has attempted to tame the internet.

The Guardian reported earlier this week that plans are in place to curb the way we – the public – comment on high-profile court cases in Britain. Attorney General Dominic Grieve laid out his grand plan. The answer? He’s going to post notes on the government’s official Twitter feed, advising what can be said within the remit of the law, to ensure we don’t prejudice the integrity of the case in question. These notes, or advisories, have been sent to the press for decades – the only difference now is that court cases are streamed and spoon-fed to the great unwashed, meaning we need educating too. 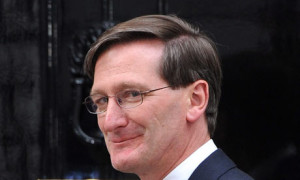 Grieve, in all his glory.

I can understand Britain wanting to take this measure. Recently, several notable cases have started off serenely enough, until a foolish Tweeter (or is that twit?) has posted something that has whipped up ill-feeling. Then, with the masses baying for blood, all notion of impartiality has been destroyed. The daughter of Bob Geldof, for instance, actually posted the names of two mothers who consented to having their children partake in the paedophilic sex games dished out by Lostprophets frontman Ian Watkins. If you’re a fan of mob justice, Twitter is the place to be.

On the other hand, Britain’s good intentions seem incredibly naïve. Does the Attorney General really expect people sitting behind their computer screens to censor themselves because of a few tweets posted on the government’s official Twitter account – the very same portal responsible for the distribution of the ill-feeling in the first place? Imagine the honourable J.Z. attempting to silence us in such a manner; he’d be decried all over News 24. Oh wait – he is already.

If anything, the Attorney General’s naivety is simply a reflection of the British government itself. It’s a nanny state. Disembark at its mothering shores and you enter a world of public service announcements and thick information guides. Last summer, with temperatures approaching 25 ºC, the Tory party rushed to unroll an announcement asking that people to remember to carry water with them while on the train.  And of course: “Always mind the gap.”

Clearly Twitter and Facebook are a part of mainstream media now, but let’s be sensible about it. Until we come up with a more meaningful way of policing the web, attempting to appeal to people’s better judgement simply won’t work.

In fact, I have a better proposal. If we want court cases to be unbiased, impartial and at all times fair, announce this over the P.A. system: “Would all jurors kindly put their phones down and get off Twitter.”

For the rest of us, it remains a guilty pleasure.