2015 IAB SA Bookmarks Awards – We are finalists!
It’s the Bookmarks this week – and we have been shortlisted.

Mention the word ‘Twitter’ to someone and they might tell you that they downloaded it once but then got confused and haven’t logged on since. They might also tell you that it’s a silly application and a complete waste of time, just like all other social media platforms. Being an avid Twitter user, you may respond quite forcefully urging them to give it another shot because it’s very cool and sometimes “you can even win free stuff.” This is true, it is super cool. Another cool thing about Twitter is being able to complain directly to brands when you get bad service or low quality products in the hope of receiving free stuff, but let us finish. Over and above whatever personal gains it provides, Twitter is quite possibly the single best advancement of today’s generation that can help in rallying up scores of people during a time of need. People who would ordinarily have overlooked major issues affecting millions of people around the world. These people are unrelated in almost every aspect of their lives, except the fact that by the power of social media, they have incited revolutionary change by coming together online and making a difference, where in ‘real life’ nobody would even have known. Here are just a few of those stories from 2014, about how Twitter changed people’s lives.

When Jada awoke one morning and logged onto her social networks, she saw a photo that had been posted of a young girl, drugged and undressed, with a caption that hinted at an alleged rape. The young girl in the photo was Jada herself.

After the image of her went viral and family and friends called to find out if she was okay, Jada made an extremely brave decision. Using the same hashtag that her attackers first used to humiliate her – Jada has taken back her power and wants everyone to see who she really is. Instead of remaining anonymous, Jada has used this platform to take back her identity, stand up for other rape victims and even advocate for stricter cyber-bullying laws to be put in place. This notion has spread throughout social media networking sites and has allowed other users to share their solidarity, rally for change, educate on the epidemic of rape culture and slam those who first used the image of Jada as a joke. 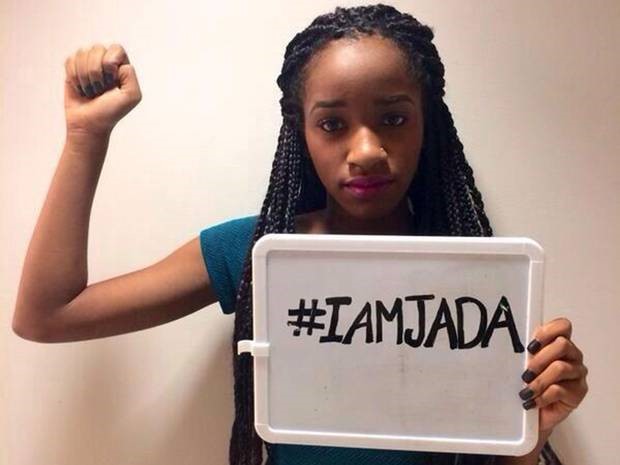 After having her alleged rape mocked and ridiculed via social media, Jada is now reclaiming her power. 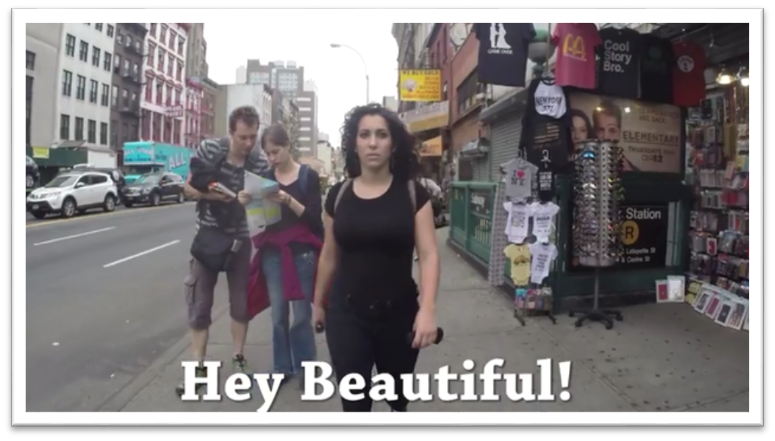 A new PSA has exposed the street harassment that women endure day after day.

The viral video, a PSA for Hollaback, showed a young woman walking the streets of New York in a t-shirt and jeans where she experienced catcalling by over 100 men. The video was greeted with mixed reactions, with many viewers lashing out and saying that these men were merely greeting– not harassing her.

American blogger and comedian, Elon James, took to Twitter and started the hashtag #dudesgreetingdudes. He asked men to tweet the compliments or greetings that they usually give to women, but this time direct them at men. The outcome was hilarious and showed just how strange some of the “compliments” are and even the reactions when the compliment is unwanted. This hashtag, along with others like #youoksis, #shoutingback and #thatswhathesaid, has opened up the conversation about street harassment.

What started as a simple Facebook message snowballed into a hashtag that received around 90 000 mentions in the space of 3 hours and showed the spirit of Australians all around the country. Labelled the Sydney Siege, the world watched as not one, but two events unfolded via social media.

While various news channels kept us up to date with the happenings in and around the coffee shop, another conversation – inspired by the words of Rachael Jacobs – came alive.

After seeing a Muslim woman remove her traditional headdress on a Brisbane train, Rachael was overcome by “feelings of anger, sadness and bitterness” and took to Facebook to air her thoughts. She in no way thought her status would reach those outside of her friends, let alone Sydney writer Tessa Kum (@sirtessa). 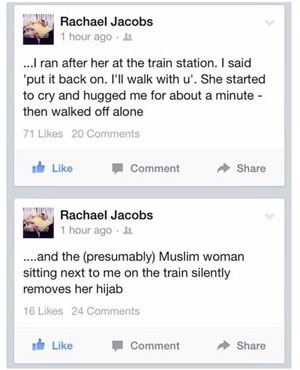 Inspired by Rachael’s Facebook status, Tessa composed a tweet and offered to ride with anyone that didn’t feel safe on public transport dressed in their religious attire. Little did she know, she would end up creating the hashtag #illridewithyou that would trend globally in just a few hours. 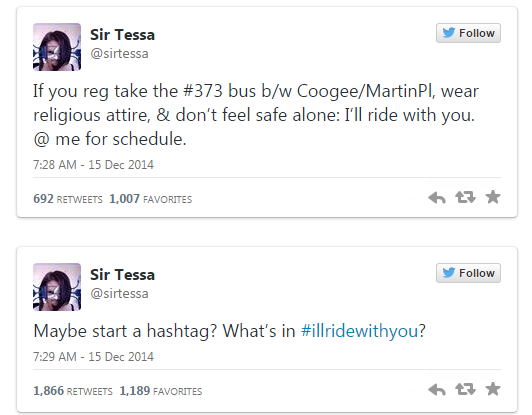 The hashtag was quickly picked up and soon, people all over Australia were tweeting their travel schedules and offering their services as a travel buddy that would stave off any racist abuse. Even people who had no plans to travel that day, tweeted their local routes and were ready to hop on a bus or train should anyone need them.

Instead of letting the country descend into an Islamophobic rage, Australians showed tolerance and respect for their Muslim comrades and set an example for the rest of the world to follow. Nothing says it better than the words of Rachael Jacobs:

I’d rather deliver a message to racists, bigots and anyone who dares to derive a message of hate from this tragedy – it is you who are unwelcome here. Your values have no place in civilised society, and if you spread intolerance, there’s an avalanche of kindness ready to take you down.

The infamous last words of 43 year-old American, Eric Garner, have made their way to various corners of the globe. For those brave enough to watch video footage of the incident, you see Garner being wrestled to the ground in a chokehold by police who took no interest in his repeated shouts, “I can’t breathe!” He lost consciousness and died shortly after.

After a grand jury announced that the police officer responsible for Garner’s death would not be facing trial, the hashtag #ICantBreathe appeared on Twitter and Instagram over 300 000 times and surged to more than 1 million in a week. People began taking to the streets in a series of peaceful protests across the U.S.A, boasting signs with the words “Black Lives Matter” and “Hands up, don’t shoot” referring to the shooting of Michael Brown in August 2014. 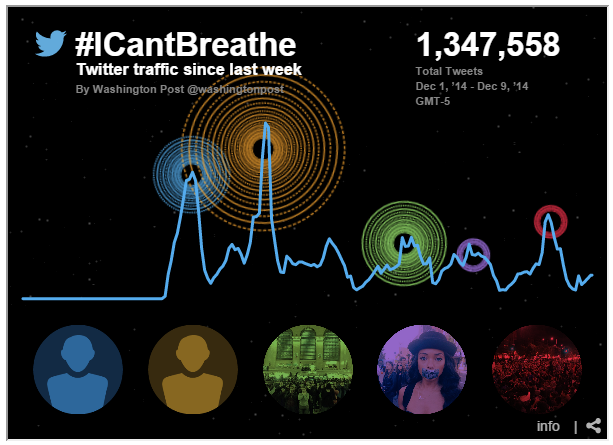 Celebrities took to Twitter to share their opinions on the jury announcement and even NBA players like Kobe Bryant and LeBron James donned “I Can’t Breathe” t-shirts as part of their pre-warm up game. 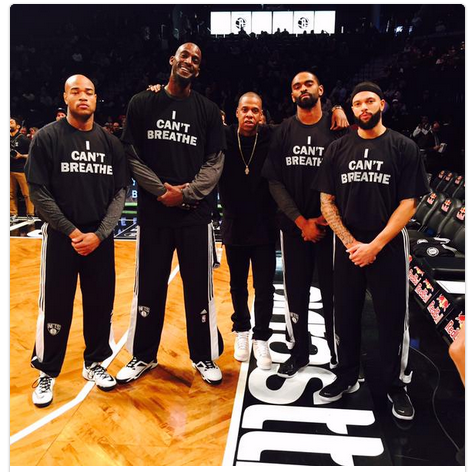 These protests have opened up discussions about racial inequality and the justice system with Americans demanding accountability from those in power. They have also sparked other hashtags like #CrimingWhileWhite; Twitter users share their stories that highlight how police treated them differently based on the colour of their skin. Again, some celebrities joined in on the action. Whether anything comes of the protests or hashtags is yet to be seen, but one thing is clear – until justice is served, no one can breathe.

Inequality, a story as old as time. Gender inequality, brought to the forefront in the nineteen twenties but only with 49.6% of the population around the world in its army. He For She changes this, reaching new frontiers and gaining strength in numbers with men joining the ranks. Society is standing up, standing together and saying no more to gender inequality. A campaign led by the simple call to action that standing up for those with no voice is a commitment and a call to share the campaign with the men in your life. Six degrees of separation spreads far and wide with the World Wide Web and the hashtag #HeForShe as its sidekick and defender of the universe. No longer a whisper but a powerful voice. Hear more about this amazing campaign and Emma Watson’s (UN Ambassador) inspiring speech here: http://youtu.be/gkjW9PZBRfk 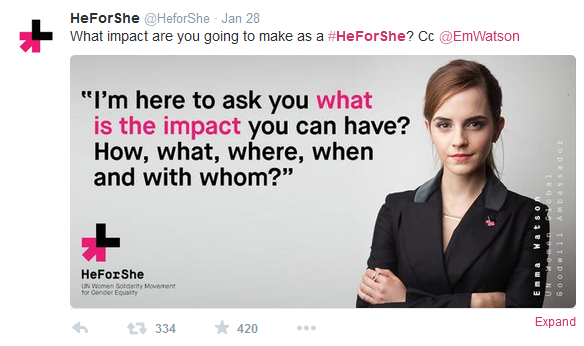 One young woman who inspired a nation.

Jenna Lowe, diagnosed at 17 with Pulmonary Arterial Hypertension inviting you to take the next step, sign up and become and organ donor. She put a face to an issue so often swept under the carpet, organ donation. Due to our “it could never happen to me” demeanour and belief that tomorrow is guaranteed, the 7 seconds it takes to sign up seemed like something we had forever to do.

For Jenna, getting to her 21st was said to be an unlikely milestone that she would never achieve. So she set about changing her future and finding herself a pair of lungs and in-turn creating awareness and educating the South African public on just how simple it is to become an organ donor, and change lives.

Partnering up with Lowe and Partners SA she set about creating an exclusive event, her 21st, and asked the public to sign up to save a life and receive an invite to the biggest birthday bash they had ever seen. Because for her to make it there, she would need their help. It blew up, the hashtag #GetMeTo21 was trending across the board, and at the last count there were 4505 organ donors who had signed up and received an invitation to her 21st birthday bash. And you know what the best part of the story is? On 11 December 2014 Jenna Lowe found a match and got herself a new pair of lungs. 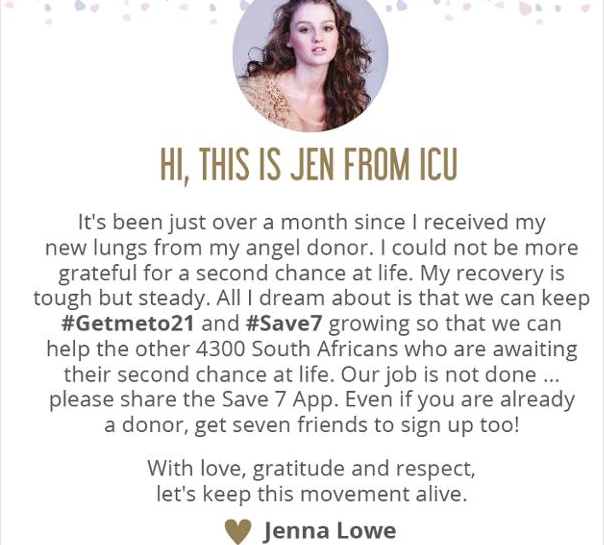 What do you think would have happened, had any of these people’s stories been overlooked? Before now, had you ever considered the deeper effects of a hashtag?

From now on we hope you can appreciate Twitter not for being a silly application and a waste of time, but for being the catalyst for social change around the world. In amongst those photos of cats and trendy lunches, there’s an opportunity for you to help as well, we promise.