During the last week, tragedy has struck affecting most people around the world. The most publicised being the terrorist attacks in Paris, on 13th November 2015. The world cried for those affected and many South Africans vocalised their thoughts and expressed their feelings via social media using the hashtags #prayfortheworld and #prayforparis. Here are some of the findings gathered by our in-house tool, Swordfish.

On the 13th we saw over 21 000 post related to the Paris bombings. The graph below shows the mentions for Pray for Paris, Pray for the world and Pray for peace.

Conversation spiked on the 14th November, one day after horrifying events took place in Paris and the hashtag #prayforparis began trending online. Soon thereafter South Africans took to Twitter, Facebook and Instagram to express their feelings about this and show support for Paris.

Out of 21000 posts around 8 to 10 thousand tweeted or mentioned the #prayforparis as opposed to the #prayfortheworld hashtag which was used less than 2000 times.

Based on our analysis, the word cloud below shows the summary of the most mentioned words relating to pray for Paris and pray for the world.

The below hashtags started trending soon after the Paris terrorist attacks. Other countries were mentioned with the “pray for” hashtag such as “#prayforbeirut, #prayforjapan. None of them captured as much traction as pray-for-Paris.

The word cloud shows that the most prominent hashtags were pray for Paris and pray for the world. Some South Africans were fairly outraged, posing the question ‘which lives matter the most’ as Paris attacks captures the worlds’ attention. 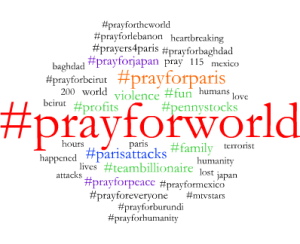 People posted pictures to Instagram using the pray for the world hashtag yet using the picture pray for Paris which was very interesting. 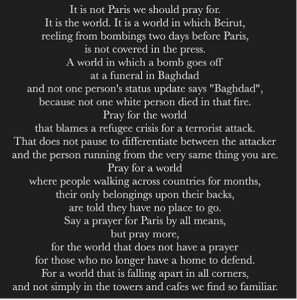