A White Christmas vs A Green Christmas
Selfies, selfies everywhere

I got it all arranged b*tch,

Mind yo’ business, stay in your lane b*tch.

I ya’ll once before, I get crazier than hell 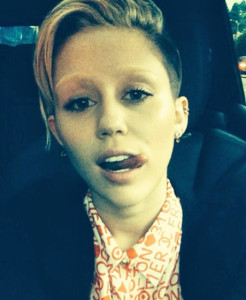 Last year was a big year for Miley Cyrus. She released her critically unacclaimed third studio album, aptly titled Bangerz, performed more than just a few hair-raising collaborations and ended up splashed across each and every tabloid all over the world. Oh yes, she also peroxided her eyebrows and was slandered as representing “everything that is wrong with the world.”

But on a more relevant note, she was Google’s most searched for person of 2013, even though the current global perception of her is that she’s a big, tacky, trailer park mess. Let’s take an in-depth look at some of the actions contributing to her being crowned Google’s new queen:

–          For starters, she hired Larry Rudolph to help recreate her image. Mr Rudolph is the same man who is responsible for turning Jessica Simpson, Britney Spears and Christina Aguilera into sex symbols in a plight to shatter their Disney princess images. Miley got rid of the long hair that made her famous during her Hannah Montana days and opted for a cropped blonde ‘do. This symbolised the beginning of a new era for Ms Cyrus.

–          Miley started twerking. She twerked and twerked until she couldn’t twerk anymore. She took twerking, and she turned it into something that many felt was nothing more than vulgar. In the video for Bangerz’s lead single, We Can’t Stop, she wore very little, and twerked oh-so-much. Miley out-twerked the world last year, and no one was overly impressed by it.

–          Let’s not forget that time she licked the sledgehammer. A lot. In the Terry Richardson-directed Wrecking Ball music video, her infamous tongue stole the show, so to speak. Miley licked a sledgehammer over and over again. That damn tongue couldn’t stay in her mouth for longer than 20 seconds. She licked that hammer like it was an ice-cream on a blazing hot summer’s day. In a later video for another single entitled Adore You, that tongue made another appearance, spurning one critic to write that she “looks like a strung out toddler who looks like she’s coming down from a heroin binge” and we should only press play if we “really want to see four and a half minutes of Miley looking like Bunny Boy from Gummo continually scratching his mouth because he’s teething.”

–          Miley hasn’t really kept her drug usage under wraps either. In her global hit song We Can’t Stop, she makes numerous references 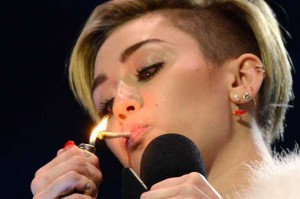 to narcotics, including the line “And everyone’s in the line in line for the bathroom/ Trying to get a line in the bathroom.” When she accepted her MTV VMA last year in Amsterdam, she made a point of lighting up a joint on stage – something which was later censored out by the music channel.

–          In perhaps her most deranged statement yet, Miley also claimed to be the world’s biggest feminist. According to The Telegraph, Miley told a presenter on BBC’s Radio 1 that she feels “like one of the biggest feminists in the world” because she tries to encourage women not to be scared of anything. Hmmmm…

I have written this post while listening to Bangerz. I can’t deny that it’s one of my favourite albums of 2013. It’s fun, it puts me in a party mood and it proves that Miley is actually talented beyond anyone’s comprehension. Every lyric has a clever, tongue-in-cheek edge to it, and it proves that Miley is, in fact, the bad b*tch that she claims to be. It’s just a pity that she’s stolen the limelight for all the wrong reasons. If people were searching for Miley Cyrus for the same reasons that they were searching for Adele, I would totally understand it. Good music goes a long way. Maybe we should all just take a step back and appreciate Miley whilst blindfolded. It’s hard to watch her perform, you guys. “Trailer park chic” isn’t a thing. Yet. But I’m pretty sure it will be soon, if Miley gets her way – and I’m not entirely sure that this is a good thing.

View all posts by Toni →