In light of the recent #AskThicke fiasco, I thought it could be fun to take a look at some of the worst social media disasters over the past few years. So, while Robin Thicke and his friends at VH1 lick their wounds and re-evaluate their position within social media’s ever evolving culture, let us bask in the humour and mishaps of some of the world’s biggest brands’ biggest failures.

Firstly, we need to understand where the management of these social communities fell through. The biggest fault often lay in the fact that there was no proper understanding of each company’s standing within social media. This is exactly what happened with Robin Thicke. The global perception of the singer is not exactly a PR team’s dream. Now, considering the fact that everyone thinks Mr Thicke is a sleazy, womanising misogynist – would it be a smart move to open the Twittersphere up to the hashtag #AskThicke? We think not.

It just wasn’t thought out as well as it should have been, which is the same problem that many of these companies realised they had – but this realisation was a little bit too late.

This strip club chain (yes, it’s a real thing) launched a Facebook campaign that saw them posting pictures of their dancers when they were babies (which in itself is slightly questionable). The posts encouraged followers to guess which one of the dancers featured in the images. However, one particular picture had a time stamp on it. A time stamp that read “Sep. 14 1998.”

No. It wasn’t. At the time of posting, the dancer would have been 14 years old. Spearmint Rhino employed a 14 year old stripper. Ummm…

#NeverForget the Tesco horse meat scandal. But it seems that the company’s social media manager did. After being embroiled in the scandal, they sent out a tweet that read “It’s sleepy time so we’re off to hit the hay. See you at 8am for more #TescoTweets.”

That wasn’t exactly the best choice of words, was it? Tesco responded to the public outcry that ensued shortly afterwards by saying that it was a scheduled tweet that they had forgotten about, and did not, by any means, intend to make light of a situation that had deeply upset so many of their loyal customers.

Serial social media offender Qantas Airlines recently asked followers to tweet their dream in-flight experiences using the hashtag #QantasLuxury. However, this campaign was launched in the midst of their industrial dispute with a few unions. So, instead of getting a nice long wish list, all they got was backlash and slander from followers regarding the current situation.

This is not the first time the airline’s social media campaigns were led astray, however. They once launched a competition that asked followers to paint their faces black in support of a rugby team. Hmmm…

This image was tweeted by Home Depo: 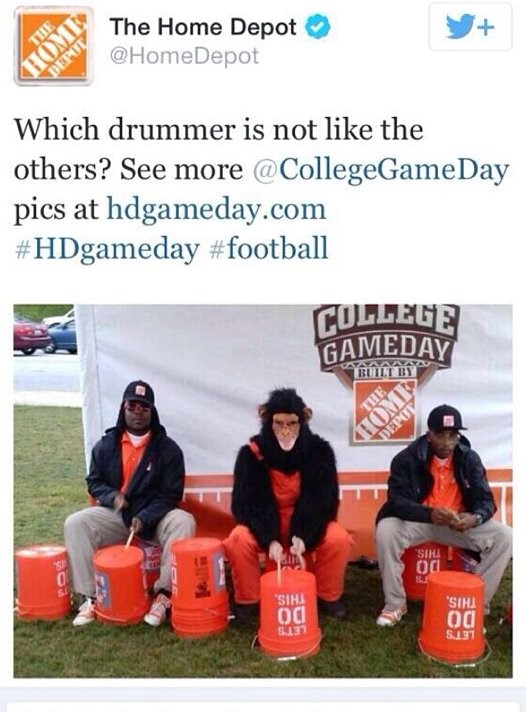 I don’t think I need to say anything else on this.