What makes Breaking Bad so good? Is it the breathless drama, the rich characters, or the moments of surprising hilarity? It’s all these things.

But more than anything else, Breaking Bad is the story of one man: Walter White. This mild-mannered chemistry teacher decides to take control of his life when he learns he has lung cancer. Ironically, with only months of life left, Walter lives. He begins cooking crystal meth in a rickety RV and commanding respect on the streets. With an eye on making enough money to safeguard his family’s future long after he’s gone, Walter ups production and finds himself immersed in a world where desperate measures often mean the difference between life and death.

Walter begins to undergo a startling metamorphosis. The beauty of the change is the subtlety of it. Over five seasons of television, Walter imperceptibly grows more depraved. It’s this beautifully-realised character arc that stands as Breaking Bad’s defining achievement.

The show is winning yet more accolades this awards season and is the best-reviewed television show of all time. So without further ado, let’s analyse just how a mild-mannered chemistry teacher becomes the meth kingpin of the American southwest. (Spoilers are kept to a minimum) 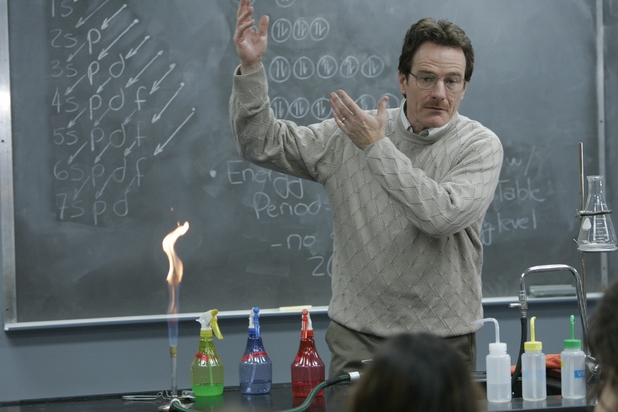 This picture is the perfect illustration of the Walter we first meet. Here he is teaching chemistry to his high school class. Notice the beige ensemble: a knitted jumper teamed with lifeless pants. Clearly this is a man lacking excitement in his life.

After hearing he has months to live, Walter takes action. He procures an RV, teams up with an old high school student, and starts cooking and distributing methamphetamine. 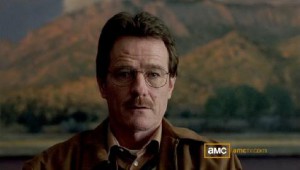 Learning he has cancer, Walter’s expression betrays his feelings of utter futility. 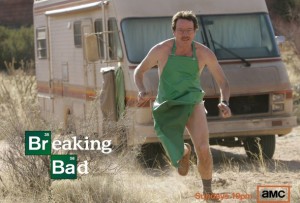 This is a picture of a man utterly out of his depth, dressed only in a green lab coat and “tightie whities”. 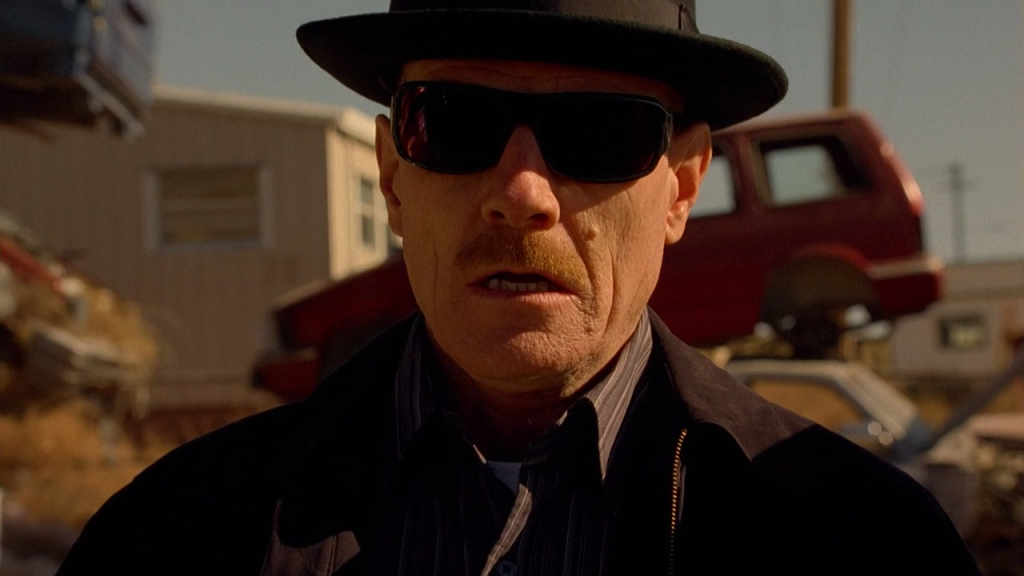 In season 2, Walter’s fashion choices don’t improve, though he does opt for dark hues over the grandpa jersey. Notice the top hat, raver sunglasses, black zip-up jacket and shirt. That’s his standard meth-dealing uniform and it’s not only a surface change. In addition to the new garb, Walter starts calling himself Heisenberg. He uses the name to keep his family’s identity secret – initially. But as he begins to immerse himself in his new life, his personality starts to subtly change too. He finds himself enjoying his newfound power, status and wealth. The mild-mannered, meek chemistry teacher is suddenly harder to discern. Walter has purpose and confidence. Yet he is unprepared for what awaits. 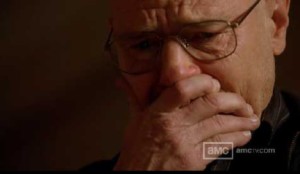 One of the most traumatic scenes in the series

Indeed, the season reaches its zenith with a scene that viewers of the show will never forget. It’s truly a moment of astounding screenwriting and makes for breathtaking television as Walter covers his mouth and his eyes well with tears. This scene perfectly encapsulates the moral questions Breaking Bad poses at every turn. And in this moment, Walter is neither good nor bad. But one thing is certain: there’s no going back. 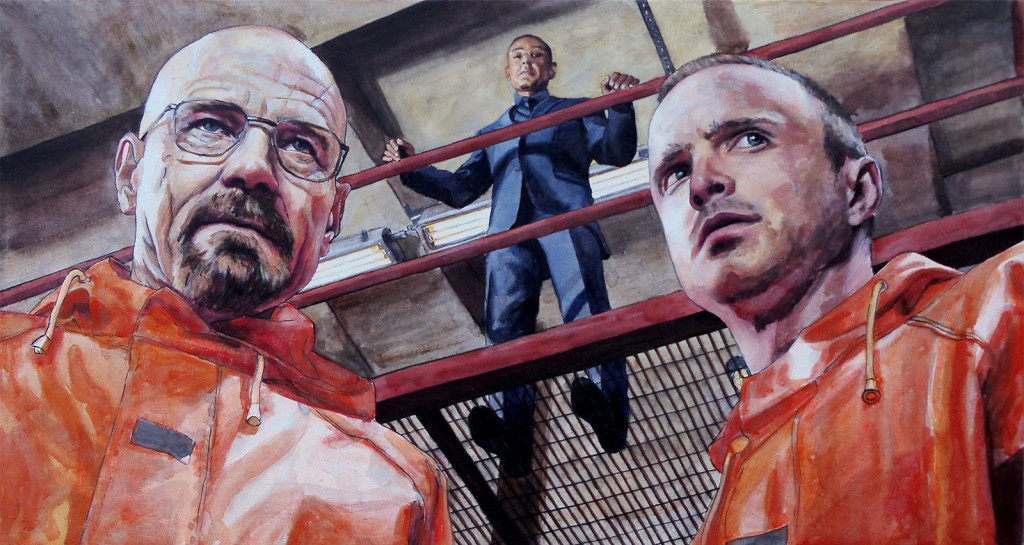 Walter takes steps to expand his business in season 3 and teams up with a powerful distributor. But there’s a problem: he doesn’t have the power he craves.

This season hurls complications at our lead character, but Walter demonstrates his insatiatable apetite for manipulation, and his ability to cunningly extricate himself from difficult situaitons. In the process, he makes potent enemies.  As the viewer, we continue to root for him because we’ve been at his side the entire way, but as the season reaches its breathless climax, the viewer comes to a chilling realisation: Heisenberg is now the real Walter and the alter ego is in control from here on out. 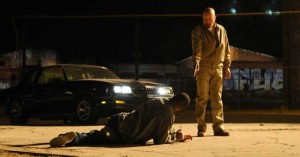 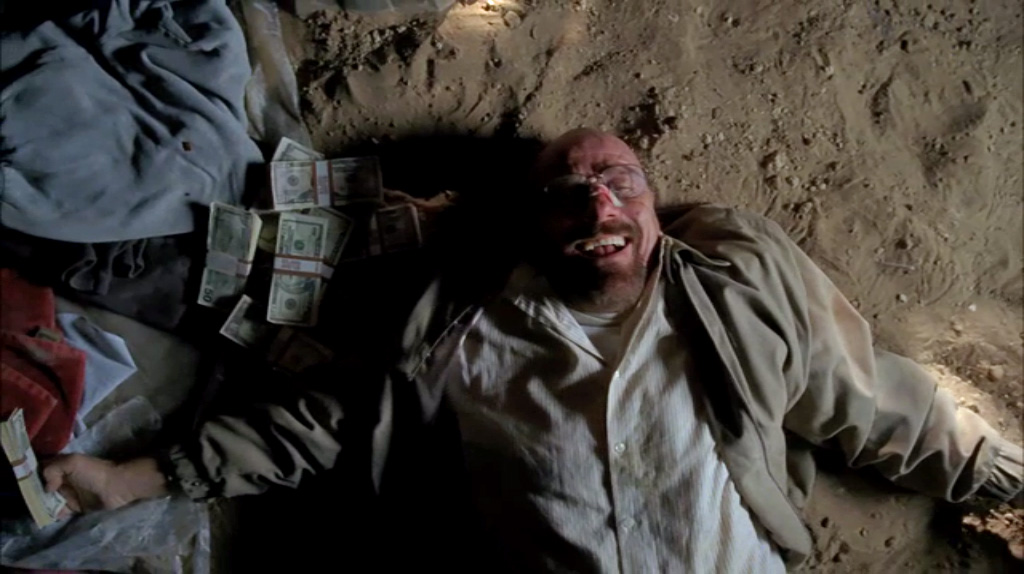 Season 4 is home to one of the most famous scenes in the show. Walter’s wife beseeches her husband to get out of the drugs trade before he gets hurt. With a growl, he tells her with a snarl: “I am the danger.”

Nothing will stop Walter now — not even his family. He can barely keep track of the double-life he’s living. His lies are starting to spill out in the open and the divisions he has sown with his loved ones are growing wider. Walter is no longer cooking meth for his family. He’s doing it to satisfy his appetite for money and power. 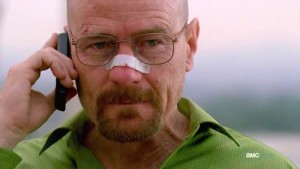 This face is a far cry from the one we first meet. 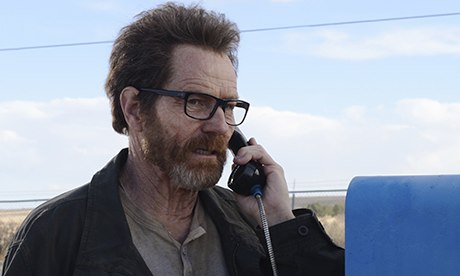 Walter has money and power, but at what cost? Worse yet, he discovers that his cancer might be in remission. Faced with the possibility of extended mortality, he’s forced to come face to face with his actions. Season 5 is Walter’s final reckoning and rounds off the show perfectly.

The show believes morality is never black and white, but it takes a skilled actor to portray the complexities of a man who undergoes such moral degradation. Bryan Cranston turns out to be the perfect actor for the task, and he’s snared numerous awards for his performance, including a SAG two nights ago.

Cranston embodies the complexities in all of us, and his transformation illustrates the way even the most ordinary person can be corrupted by power. There’s a dark side in us all. Just don’t let life imitate art, or you’ll end up like this man.