Inside Saatchi & Saatchi: welcome to our world
Social media analytics: The numbers game

Yeezianity is an actual religion! Now while the feeds of Buzz and Twitter spread this article like wildfire I can’t help but feel it’s for the wrong reasons. Yes, the internet is all about zany content – have you seen the strange news articles that are spewed out nowadays? Everything from ‘divorce over peas’ to ‘cats as mayors’ are staples, but there is a definite line that has been crossed with Yeezianity. I will attempt to break down my argument in the hopes of pointing out a serious flaw in our development without looking like a technology-hating, Generation-Y-nay-saying, ivory-throne-sitting fuddy-duddy.

Religious Freedom vs. Freedom of Expression

This may be wordy so be prepared. Freedom of religion, belief and opinion is understood by three simple tenants.

1. Everyone has the right to freedom of conscience, religion, thought, belief and opinion.

2. Religious observances may be conducted at state or state-aided institutions, provided that ¬

a. those observances follow rules made by the appropriate public authorities;

b. they are conducted on an equitable basis; and

c. attendance at them is free and voluntary.

a. This section does not prevent legislation recognising ¬

i. marriages concluded under any tradition, or a system of religious, personal or family law; or

ii. systems of personal and family law under any tradition, or adhered to by persons professing a particular religion.

b. Recognition in terms of paragraph (a) must be consistent with this section and the other provisions of the Constitution.

Pretty straightforward right? A look at the very next act, however, makes this action significantly more complicated. The Freedom of Expression, as its name suggests, allows for all forms of expression but with the provision that it does not extend to:

a) propaganda of war;

b) incitement of imminent violence; or

c) advocacy of hatred that is based on race, ethnicity, gender or religion, and that constitutes incitement to cause harm.

Yeezianity is by no means the only form expressing views on religion; The Church of the Flying Spaghetti Monster and Jedi being some of the latest additions to people’s personal beliefs. The recent news of the Satan statue design for the Oklahoma Capitol is even a logical albeit incendiary comment on religion. Its design came about in response to the construction of an overtly Judeo-Christian symbol (Ten Commandments monument) on the Capitol grounds. While their statement is as subtle as a sledgehammer; the Prince of Darkness design begs us to remember that religion and politics should never be one and the same. Arthur Miller’s The Crucible is a poignant reminder of what Theocracy can do to society.

Yeezianity, however, doesn’t have the platform nor the moral standpoint to belittle Christianity. I am by no means a Christian but images such as this 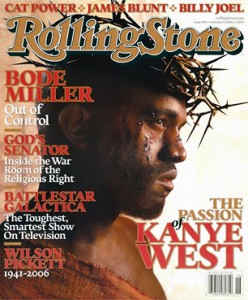 are offensive, even to me. The reduction of millions of people’s faith to a mere tour/marketing theme is downright preposterous. Christians have already had their religious holidays trivialized to the point where Christmas is no longer a religious festival but merely a ‘festive’ one. Businesses abuse the sanctity of a religious holiday for increased sales all the while stating their Christmas functions can’t be Christian. As if that weren’t enough the name Jesus, considered sacred to believers, has been bastardized in some pithy attempt at turning an artist into an icon. This leads me to my next soapbox…

Now I’m not going to stand up and say pull down all your idols, but there must be a line between having role models and being a fanatic. Once again, reports of ridiculous acts enacted as a result of some celebrity’s actions, also human and prone to error might I add, can be found at the simple click of a button. IO9 reported a Twilight fan who shot a group of people discrediting the movie with a flare gun. She was held for $50 000 bail while the victims suffered temporary blindness and burns. I have yet to find the original report of this so take it with a pinch of salt. The fact that such a report is worthy of publishing is reason enough however. Justin Bieber fans are never too far from the headlines with Berserker-faced teens screaming at cameras, chasing cars and becoming overwhelmed to the point of tears and awe when in the actual presence of their favourite pop star.

I have one thing to say: all of these people – Justin Bieber, Kanye West, Robert Pattinson – are all human.

What I (Zak Averre) think

Re-reading my above concerns I feel as if I may come across as predisposed to disliking the aforementioned celebrities. It is true I don’t enjoy Twilight, Kanye West (at least anything after ‘Through the Wire’) or Justin Bieber, but maybe that’s the perspective one needs. I too am guilty of enjoying musicians or characters a little too much but I draw the line at infringing upon another’s religion or wellbeing. Here are a few tenets I live by:

Never will I attack someone for disagreeing with what I enjoy

Never will I wantonly desecrate another’s belief, at least purposefully

Never will I look to pull down the accomplishments of anybody, famous or not

The founder of Yeezianity claims Kanye isn’t a ‘God’ he merely inspires fans to think of themselves as gods. He also claims it’s just an idea not necessarily a religion. While the intentions behind Yeezianity are all aimed at bettering the individual through positive reinforcement it falls into the pitfall of being centred on an individual. If you believe in Yeezianity then no name is necessary. Rather not use a play on words to build up hype for what you believe and tell people in a non-offensive way. Here is the link to an interview with Yeezianity’s creator. I recommend you read it and make up your own mind because that’s what each and every one of us is capable of doing.

Whether or not you think Yeezianity is an infringement on Christianity is up to you. Does it qualify as hatred? Therein lies the beauty of Freedom of Expression, autonomy and being human. We have the power to decide for ourselves! All I know is that I am ‘Bound 2’ my beliefs and the protection of the beliefs of others and not Kim Kardashian on a CGI bike.

View all posts by Zak Averre →